Skip to content
According to star anise farmers in Van Quan district (Lang Son), star anise is a specialty of Lang and is the main crop of the local people. For generations, star anise has been feeding for many families. In the memories of the locals, star anise is familiar like the companion of his life.
Because their life associate with star anise, they have ways of preserving star anise to ensure quality and preserve the scent longer.
Star anise is gathered from old trees, accumulating many medicinal substances. They choose the big, regular, non-blooming star anise flowers for preservation.

The most common way to preserve star anise is sun exposure. On hot days, people spread canvas on the fields. They strip star anise on that canvas to catch the sun’s rays. Star anise directly exposed to the sun will have a natural yellow color and retain the fragrance better.

People built specialized stoves to dry star anise. The surface is covered with a layer of stainless steel so that the star anise does not fall down. There are many small compartments below to burn the fire. Local people mainly use firewood from forest trees for fuel.
Drying star anise with charcoal is the most complicated way to preserve them. However, this is the most effective method during the wet season. Because star anise is collected a lot. If it is not promptly dried, star anise will become moldy and damaged. Therefore, drying star anise by charcoal will be the first priority.
The rule of star anise drying is also very important. They simmered so the star anise does not burn but still ensure enough heat to dry the product. Workers must constantly turn star anise to avoid uneven dryness.

However, this method is quite expensive, not really popular in Lang Son. With anise output too large, drying by machine also costs a lot of electricity, increasing product costs. Therefore, at present, this method has not really been applied by many local people. 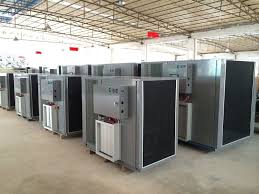 This is the most popular method of drying medicinal herbs today. However, the construction of these standard kilns is also quite expensive. However, this is a long-term direction, helping to preserve the most standard star anise. This is also a long-term solution for anise purchasing facilities that meet the stringent requirements of demanding markets.
After being dried, star anise is put into safe, sealed plastic bags to prevent moisture from penetrating. Room to preserve star anise must also be clean, airy, preferably sterilized environment.
In order for Lang Son dried star anise to meet the strict requirements of fastidious markets, preservation is one of the extremely important stages.