Skip to content
Lang Son star anise is considered by many people to be a valuable product of Lang country, recognized as a geographical indication of the province, a pride when it affirms its position in the marketplace.

2. Identify the characteristics of star anise

Star anise characteristics in terms of morphological perspective: Star anise is a small, evergreen tree, about 8 – 15m high for mature trees. The body grows straight, the trunk is round, the bark is gray-brown. Young stems are plump, without scales, smooth, light green, and grayish-brown when developed.
The leaves grow alternately and grow thick at the top of the branches, looking like rings, each round usually has 3-5 leaves. The leaf blade is thick, hard but brittle, smooth and has an egg shape but it is slightly longer, 8-12 cm long, 3-4 cm wide, the upper surface is dark green and the underside is light green. Leaf veins shaped like a feather, consisting of 9-12 pairs but the veins were not prominent on the surface. The petiole is about 7 – 10 cm long.
Star anise is a hermaphrodite, grows solitary or grows from 2-3 in the leaves. The peduncle is somewhat large and short, greenish, with a pink edge and falling off after the flower blooms. The petals are usually 15-20 petals, oval, the petals are usually smaller than sepals, the outer surface of each petal is white, the inner side of the petals is dark pink and gradually darkener when it gets in. Flowers grow in March-May, and fruit crops in June – September.
The easiest way to identify star anise is basing on the shape. Specifically, star anise has a star shape 6 – 8 – 13 great, radiate round, green color that people still call star anise seeds but it actually is star anise flowers when ripe turn brown. Each seed consists of 1 seed, the egg-shaped seed but is elongated and flat, smooth and when the seeds are ripe or old, they are brown or reddish. 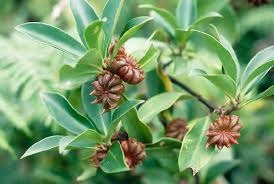 It is suitable for the climate of the mountainous areas of Northeast Vietnam, especially in Lang Son and Southern China. The growing areas are mainly concentrated in the height of 200 – 300 – 400 – 600 m with the annual average temperature in these areas falling between 18 – 22 ℃. The average annual rainfall suitable for the growth and development characteristics of anise is from 1,000 – 1,400 – 1,600 – 2,800 mm.
The two regions of anise growing, Vietnam and China, are located in the tropical monsoon climate, with mountainous terrain, which is strongly influenced by the northeast monsoon, with four months of low temperature every year (13). – 15 ℃) and usually with hoarfrost.
In recent years, due to the impact of climate change, the winters are somewhat harsher than before, there are cold air spells down to 4 – 7 ℃ in the mountains, even snow appears, affecting to the growth and development of star anise.
As for soil, the tree likes thick soil layer, fertile, easy to drain, pH 5 – 8. Especially the kind of red, brown, yellow fellate soil, grown on shale. It is a light-demanding tree, but the young stage needs to be shaded by a shade system.
Trees 5-6 years old can reach heights of 9-10m. The growth height of the tree reaches from 1.5 to 2m / year. Seeds, if well cared for, can flower between 5 and 6 years of age. Seeds emerge 2 crops a year.
Star anise quality characteristics depend on the season. The main season of recovery (the seasonal crop) usually falls in July – September, and only one year after that it produces ripe fruits (ie, 7 – 9 years later), in the main season, the yield and quality of fruits are very high.
The case of falling in March – April, but the yield and quality are low because most young fruits are fallen, not fully developed (called star anise, mouse leg, dog foot …).
Star Anise fruit (star anise pods) 8 wings is called type A, from 3 or more wings called type B, while less than 2 wings called star anise C. The more wings, the more uses and quality of star anise is.