Skip to content
At this time, people in Sy Binh and Vu Muon communes (Bach Thong) are concentrating on harvesting star anise. This year, growers are excited by the season, with prices higher than previous years. 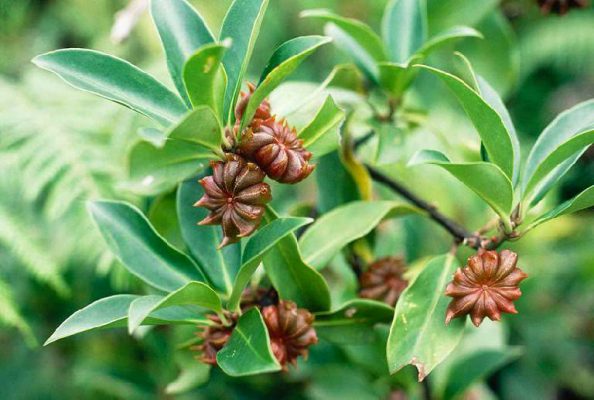 .
We went to the star anise forest of Mrs. Nong Thi Uyen, village 1B, commune Sy Binh, while the family was busy mobilizing manpower to harvest. Ms. Uyen happily said: The family has 10 hectares of star anise, about 80% of the area has been harvested. Since the beginning of the crop up to now, more than 2 tons of flowers have been collected, with the selling price fluctuating by VND 30,000 / kg of flowers. Ms. Uyen said that since planting until now, no year has she seen star anise flowers have a high price like this year, on July 16, the price is 32,500 VND / kg, almost twice as high as compared to the crop in 2018.
.
Therefore Her family is taking advantage of the beautiful sunny weather to mobilize workers to collect star anise flowers to sell to traders. It is known that the star anise area of ​​Ms. Uyen’s family has been planted for a long time. Later, when the State’s project 327 & 661 supported, the family gradually expanded the area. Her family income has improved a lot thanks to star anise.
.

.
Ms. Ly Thi Chuong in village 1A, Sy Binh commune also has a star anise area of ​​up to 2ha which is being harvested. Currently, the family has collected about 4-5 quintals of star anise. With the average selling price of 30,000 VND / kg, the family will earn nearly 100 million VND, which is a lot of money for rural households.
.

Star anise in Bach Thong is concentrated mainly in two communes, Sy Binh and Vu Muon, about 400 hectares, of which about half of the area has been harvested. Star anise here is mainly grown from the 1990s to 1997 through State programs such as Project 327 & 66…
.
According to the local people, star anise trees like to cool, suitable for sloping ground, thick soil layer, drainage. water but must have moisture. The advantage of anise is that it is easy to grow, less susceptible to pests and diseases and only takes the first few years of care until the canopy closes, it only clears weeds 2-3 times a year, if the soil is good, about 8-10 five trees are available for harvest and can be harvested for a long time.
.
The economic efficiency from star anise is very considerable; the output is favorable because it is purchased by traders. The price depends on each year, there are five high prices, people can sell over 20,000 VND / kg of fresh star anise, the lowest is about 7,000 – 10,000 VND / kg. This year alone, the price was record high, reaching over 30,000 VND / kg of fresh star anise flowers, the star anise growers were very excited.
.

The output of star anise is quite favorable, for a long time, people have been harvested to buy there, but the price is quite volatile because it depends entirely on the purchase of traders to sell to China.
.
Therefore, people want to be paid attention to by authorities and functional sectors to find a stable output and consumption of products. At the same time, continue to have supportive policies on science and technology of planting, tending, harvesting, and post-harvest preservation for farmers to improve product quality and increase income.