Skip to content
Referring to Vietnam, it is sure to mention Vietnamese flavorful pho. All the way to Vietnam, from luxurious restaurants or sidewalk restaurants, a steaming bowl of pho are indispensable dishes on the menu. Pho is loved by the softness, the rich taste of the broth and the quintessence of the ingredients. Although Pho is not difficult to cook, it is impossible to create a flavorful and attractive Pho without star anise. Using star anise, modifying ingredients and spices in moderation, are the secrets of the delicious taste of Pho. 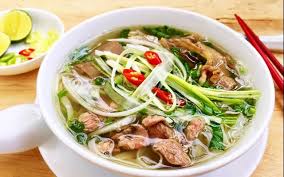 1. Star anise and Pho – Simple secret not everyone knows

As Vietnamese, no one does not know the delicious bowl of pho. Pho must be thin, soft, white, and not sour. The broth must be tasty, blended – This is also the core element that creates an attractive bowl of pho.
Firstly, the cook must simmer beef bones to create a sweet taste for the broth. The cook will then coordinate the spices and ingredients to create the most standard pot of water. Depending on each restaurant, the recipe is different but all includes cardamom, ginger, star anise, clove, coriander seeds, cinnamon stick, dried onion, shrimp, ginseng. Today the broth has also been changed in many different ways, only the traditional, long-standing restaurants retain the flavor of pho in the most complete way.
Regardless of how the pho is modified, most restaurants now have a traditional secret: using star anise and cinnamon to cook pho. Without this herb, pho will become bland and unattractive. The star anise is small but has a wonderful contribution to the taste of pho. Thanks to it, pho became sweeter, delicious and unforgettable.
In addition to creating flavor, star anise has a stimulating effect on the taste, creating cravings. Therefore, no chef will forget the small star anise wings in the dish. This is a simple secret that you should remember and apply it right in your kitchen.

2. How to make a simple bowl of pho at home

If you want to have a delicious bowl of pho, please refer to the secret below to have a wonderful meal with your family.

The ingredients needed are beef bones, beef/chicken (depending on the type of noodle you cook), cardamom, cinnamon, dried onion, ginger, dried peasants, spices (salt, pepper, ..). ), noodles, onion, dry onion, basil. In particular, do not forget to use star anise to cook pho if you do not want your dishes lacking inherent attractiveness.

First, you need to pry through beef bones, drain and put in the oven at a temperature of 250 degrees C for about 10 minutes. This will reduce the smell causing the bones, creating an attractive flavor for the broth.
Then you put the bones in the pot, boil water over low heat for about 2 hours. If you want to eat a medium-sized beef noodle soup, you can dip it in this pot of broth. While cooking beef bones, you should pre-process the remaining ingredients: grilled, wash the onions, star anise, cinnamon, cardamom, then put into the pot of water for about 1 hour;
Cut the green onions, onion, basil and poached noodles in boiling water.
Finally, you just need to put the noodles into the bowl, for the broth, decorate. It sounds simple, but if you don’t really pay attention, it can be difficult to create a traditional, delicious noodle soup. You can eat with lemon, chili garlic vinegar to make noodles more attractive and stimulate the taste.
Thank you for watching, follow us for more news and dishes from star anise!